A red-eyed tree frog is a brightly colored arboreal frog that is often kept as a pet even though it typically cannot be handled much. It’s visually stunning, making it a gorgeous display animal in the right setup. These frogs are nocturnal and are native to Pacific, Atlantic, and Central American tropical rainforests. The breeding calls from males can be heard for miles around from May through December when red-eyed tree frogs seek a mate. Although not endangered, these frogs have essentially become the “poster child” for save-the-rainforest movements, and are one of the most easily recognized species of amphibian.

Perhaps the most well-known thing about the red-eyed tree frog is its bright coloring: blue legs, vibrant green bodies, orange toes, and of course, striking red eyes. How colors appear vary depending on where the frog originates from, and the most commonly seen red-eyed tree frogs in the pet reptile community have mottled blue sides with vertically striped white reticulations. They are small and delicate, with smooth, damp skin. These frogs can change color according to their mood, which is usually a darker green or reddish-brown color that is quite a stark contrast from their bright green color.

Red-eyed tree frogs are quite small and range from just 1″ to 3″ in length. Like many amphibians, males are typically larger than females.

In captivity, the red-eyed tree frog lives about 8-12 years.

Like other amphibians, a red-eyed tree frog is a carnivore and feeds mostly on insects. They prefer to eat crickets, moths, grasshoppers, and flies. Sometimes, they will eat smaller frogs, however, this is infrequent since few frogs are as small as the red-eyed tree frog. Red-eyed tree frog tadpoles will usually eat pinhead crickets or fruit flies.

Red-eyed tree frogs are generally calm, docile animals who aren’t prone to aggression. However, they don’t like to be picked up or handled in any way, even after regular socialization. Too much handling can overstress a red-eyed tree frog, making it vulnerable to illness or potentially causing death from shock. If you’re happy observing your frog from outside its enclosure, it can make a fantastic pet. If not, you may want to consider another species. Most tree frogs prefer not to be handled, but the White’s tree frog (also called the Australian green tree frog) will tolerate being handled for short periods of time.

Red-eyed tree frogs can be fun exotic pets, but they’re better suited to reptile enthusiasts with intermediate knowledge. Ensuring that a red-eyed tree frog has the proper diet and habitat is of the utmost importance for their health and well-being.

Red-eyed tree frogs for sale can be found in online reptile shops, local pet shops, directly from breeders, or at reptile expos like our own Reptile Super Show.

Despite their small size, red-eyed tree frogs need a large habitat. Just one adult frog needs a 35-gallon terrarium, and if you own multiple frogs, you will need to increase the size of the terrarium respectively. The enclosure should be taller than it is wide and be secure on all sides. The natural habitat of the red-eyed tree frog is a humid rainforest, so try to mimic that environment as much as possible. Include a large, shallow water dish and a “dry land” area. Alternatively, a deeper dish can be filled halfway with aquarium gravel to allow the frog to soak (it will not swim). Do not use tap or filtered water for your frog — it contains chlorine, which is fatal when absorbed through the delicate skin of the frog.

Since their natural environment is the rainforest, humidity is critical for the health of a red-eyed tree frog. The enclosure should stay at around 70% humidity, which can be achieved by using different substrates, controlling ventilation, and misting the enclosure a few times per day.

Jungles are also quite warm during both the day and night with very little temperature difference between the two, so this should be replicated in captivity. Daytime temperatures should not drop below 77 degrees or exceed 86 degrees, and nighttime temperatures should hover around 70 to 75 degrees. Use reptile heating pads or a heat lamp; red, purple, or blue light is ideal because it does not need to be turned off at night.

Unlike other reptiles, red-eyed tree frogs do not full-spectrum lighting to prevent poor vitamin absorption and metabolic bone disease. However, low-level UVB rays can be beneficial for captive frogs.

The bottom of your frog’s terrarium should have about two inches of aquarium gravel, topped by six or so inches of soft substrate like peat moss. Coconut husk products are an excellent choice because they help to promote healthy humidity within the enclosure. Orchid bark, sphagnum moss, and cypress mulch are also acceptable substrate choices. Ideally, you’re using a substrate that is fungus and mold resistant.

Since red-eyed tree frogs are arboreal, they need plenty of space to climb. Artificial tree limbs that stretch the height of the enclosure give your frog areas to move about, while decorative plants offer cozy places to hide. Choose artificial plants with large, broad leaves, since these are the most similar to what red-eyed tree frogs use in their natural habitat for sleeping and shelter. You can also use live plants purchased from a reputable breeder; never put items from outdoors inside your frog’s terrarium. Many plants, rocks, and branches outside are contaminated with pesticides, fungi, and foreign bacteria that can be harmful to your pet.

Crickets are an excellent and easy-to-obtain food for red-eyed tree frogs. However, it’s important that the size of the crickets offered to the frog be in proportion with its size; too-large crickets are inedible by small frogs. On the other hand, adult red-eyed tree frogs can usually eat even very large crickets. Other feeder insects that can be purchased at pet stores are also suitable; frogs will sometimes take worms, but not always.

Insects should be dusted with a high-quality calcium and vitamin D3 supplement before offering to the frog. This is particularly important for baby red-eyed tree frogs, who must have calcium and D3 supplemented at each meal. Older frogs may go a feeding or two without being supplemented because they are less in danger of developing a metabolic disorder. A good reptile vitamin should also be added but is usually only dusted on the insects once or twice a week instead of at every feed.

Red-eyed tree frogs should only be handled when necessary. Being handled puts a great deal of stress on the frog and should only be done in cases where the frog is ill or injured and in need of attention. If you do handle your frog, wash your hands with a scent-free, dye-free soap with as few chemicals and additives as possible. A red-eyed tree frog’s delicate skin easily absorbs toxins by touch, so it’s important that your hands be as clean as possible if you need to touch your frog. Red-eyed tree frogs aren’t poisonous, so the frog poses no harm to you should you need to handle it.

Red-eyed tree frogs have a number of health issues that require medical attention. Owners should have a savings fund set aside for specialized veterinary care. Common health problems include:

Red leg disease. A disease thought to be caused by a parasite that generally occurs only in captive red-eyed tree frogs. Red-leg disease results in redness on the belly and thighs, weight loss, weakness, lethargy, and bleeding from the mouth.

Metabolic bone disease. A common and easily prevented reptile disease that can cause red-eyed tree frogs to stop jumping and become lethargic.

Oodinium. A condition characterized by grey spots on the frog’s skin. When detected early, treatment includes soaking the frog in clean, distilled water and thoroughly disinfecting the tank and decor.

Before purchasing a red-eyed tree frog, it’s important that you locate a vet nearby who will be able to treat it. Few vets are skilled in treating exotic amphibians, and you don’t want to find out that the nearest vet that does is three hours away after you get your frog home.

Captive frogs live nearly double the lifespan than frogs in the wild. This is thought to be due to the ever-present dangers for tree frogs in their natural habitat.

These frogs prefer to live by themselves and only engage with other frogs of the opposite sex to mate.

Red-eyed tree frogs have excellent vision, thanks to their large, wide eyes and fantastic depth perception. This helps them to avoid predators since if caught, they’re largely defenseless.

Fossils of red-eyed tree frogs indicate that these amphibians may have lived as long as 10 million years ago. Red-eyed tree frogs are nocturnal, so you’re unlikely to see them during the daytime. They hide on the underside of leaves with their legs tucked in and eyes closed, so the blend nearly perfectly with their environment.

These frogs aren’t toxic like other species of tree frog, but they aren’t eaten often because their taste is quite terrible

Male frogs will vibrate the perch they are sitting on to mark their territory. This warns other male frogs not to come near; this tactic grants frogs about 1.5 meters of space.

Female frogs are thought to select their mate based on a combination of their call and size.

Females lay their eggs in a gel-like substance on the underside of a leaf just above a body of water. This lets the tiny tadpoles “fall” into the water immediately after hatching.

Sometimes, eggs will hatch early if the tadpoles inside sense the vibration or outside movement of a predator to make a quick getaway.

Even though red-eyed tree frogs are small, reaching just 1.5 to 2″ in length, it takes them nearly two years to reach full maturity.

“Suction cups” on the frogs’ toes allow them to easily jump from surface to surface, even upside down or onto wet leaves. The feet also secrete a mucous-like substance that further helps them to stick to various surfaces.

Sometimes, male frogs will wrestle and attempt to pin one another to a leaf to assert dominance and attract females.

Some frogs can have small yellow speckles that help them further blend into the surrounding foliage.

Many scientists believe that the frog’s bright colors are not meant to startle predators, but rather, to allow the frog to quickly blend back into its surroundings and lose the predator.

Red-eyed tree frogs use their eyes to help them swallow by blinking, which helps push food down their throats quickly. This means that red-eye tree frogs are among the fastest eaters of the amphibian kingdom.

The red-eyed tree frog is not yet endangered, even though it tends to be used as the “poster child” for rainforest protection and endangered species initiatives.

Where to Find a Red-Eyed Tree Frog for Sale

There are several places to purchase a red-eyed tree frog as a pet:

Although red-eyed tree frogs aren’t terribly expensive, the average pet store doesn’t sell them. However, you can purchase a red-eyed tree frog from a reputable online breeder. Breeders ship frogs overnight, so they aren’t overexposed to heat or cold during the shipping process.

Find a New Tortoise at The Reptile Super Show

Reptile shows are one of the best places to purchase exotic reptiles. Where many pet stores and online breeders often only have one or two species of tortoises to choose from (or perhaps just one or two tortoises altogether!), reptile shows offer the widest variety of animals in a single place. Breeders that attend reptile shows have a true passion for their animals and can help both novice and advanced reptile owners improve their knowledge of caring for tortoises.

Reptile Super Show is the world’s largest reptile show and sale. Come visit us in California and browse the largest collection of tortoises, snakes, exotic lizards, and other reptiles for sale under one roof! 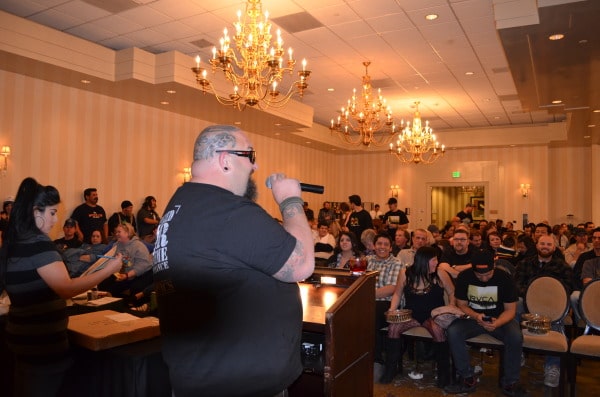 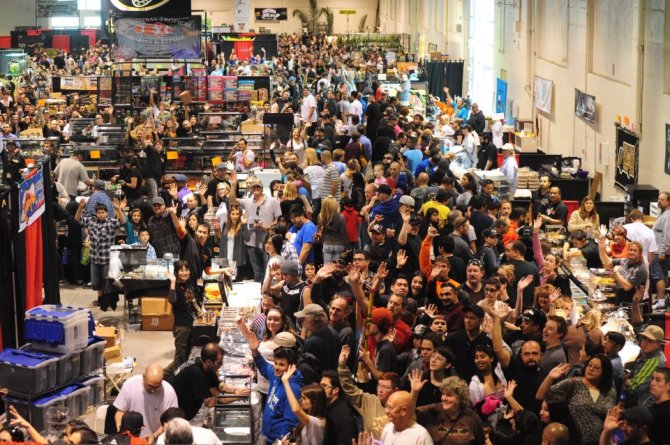 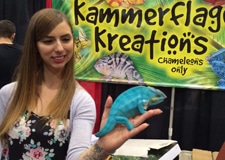 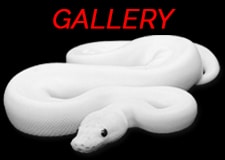